What are Binary Classifiers?

A binary classification model is one that assigns either of two outcomes to the input. This could be a model that detects SPAM, which given a set of features representing an email would output TRUE if it is classified as SPAM email or FALSE otherwise, i.e. HAM email.

Another example would be a medical diagnosis model that based on the input data determines whether a particular disease is present or not.

Since there are two possible actual states, i.e., true/false or positive/negative or 1/0, and the model can predict either one of them, there are in all four possible outcomes as follows.

The above table is referred to as a confusion matrix.

In statistical hypothesis testing, a type I error occurs when the null hypothesis $H_0$ is rejected when it is true.

The probability of rejecting the null hypothesis $H_0$ when it is true, the type I error rate or False Positive Rate (FPR), is denoted by $\alpha$ and is called the significance level or alpha level, commonly set to 0.05, which means that it is acceptable to reject $H_0$ when it is true in $5\%$ of the cases.

In statistical hypothesis testing, a type II error occurs when the alternative hypothesis $H_1$ is rejected when it is true.

The probability of rejecting the alternative hypothesis $H_1$ when it is true, the type II error rate or False Negative Rate (FNR), is denoted by $\beta$.

As statisitical power increases towards $1$, the probability of making a type II error, i.e., a false negative (FP), decreases. In fact, $power=1-\beta$, where $\beta$ is the type II error rate or False Negative Rate (FNR).

For a balanced data set, i.e. one where there is an equal amount of positive and negative outcomes, accuracy is not a bad measure of model performance. Using a balanced data set, if the model always predicted positive, or negative for that matter, the expected accuracy would be $\sim0.5$. Under such a scenario a model that gives high accuracies, say above $0.8$ or $0.9$, will most likely be considered to be performing well.

On the other hand, for an imbalanced data set, for example, a fraud detection system where say, less than $0.1\%$ of transactions are fraudulent, accuracy is not a good measure because a model that always predicts not fraudulent, i.e. negative, will have a very high accuracy of $\sim0.999$.

Precision and Recall are two performance measures used in particular in information retrieval tasks. In such context, precision and recall represent the following:

In the context of a binary classifier, precision and recall represent the following:

Taking either of precision and recall on their own is not useful. For example, suppose a SPAM detection model is tuned to detect all SPAM emails. In doing so, many HAM emails get classified as SPAM. In this case, the $FN$ will be low or zero, but the $FP$ will be quite high. Therefore, $Recall$ will be close to $1$ while $Precision$ will be low or close to zero.

Therefore, a better measure is the $\textit{F-measure}$ which is the harmonic mean of $Precision$ and $Recall$, computed as follows: 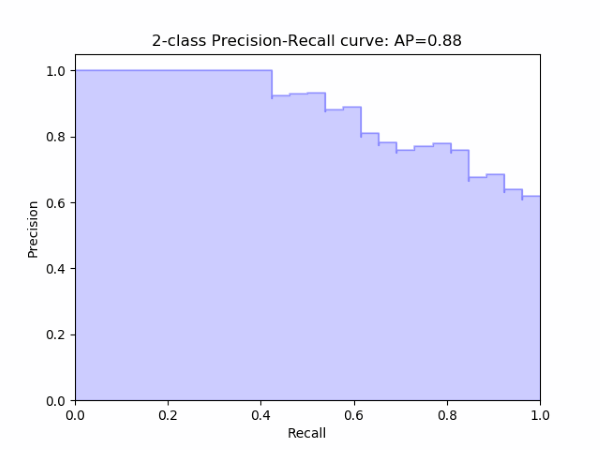 Note: $\textit{F-measure}$, $Precision$, $Recall$ and PR-curves need to be interpreted in the context of the task at hand. For some tasks, say fraud detection, we might want a very low or zero $FN$ rate and can live with some $FP$, if it means detecting all fraudulent activity.

On the other hand, in a SPAM detection system, we might prefer to let some SPAM emails slip by undetected, so have a slightly higher $FN$ rate and a low or zero $FP$ rate, rather than risk blocking a legitimate important email from a potential or existing customer as SPAM.

$Sensitivity$ and $Specificity$ are also known as the True Positive Rate and True Negative Rate respectively and are computed as follows.

A perfect classifier would thus have high sensitivity, so $FN=0$ and thus $TPR=1$, and a high specificity, so $FP=0$ and thus $1 - TNR = 0$, resulting in the point in the top-left corner on the figure below. Any curve to the left and above of the red dashed line, representing a model classifying randomly, is a better performance than random guessing, and to the right and below is a classifier performing worse than random guessing. 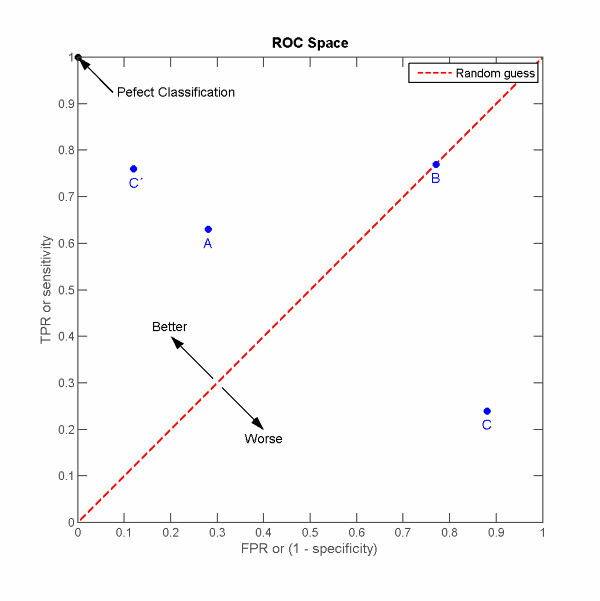 ROC Area Under the Curve (AUC) 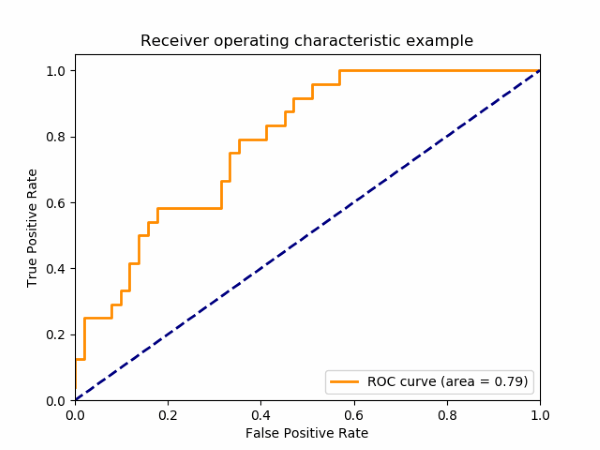 In the example ROC plot above, the $AUC=0.79$, which is good. Definitely much better than random guessing. Certain medical diagnosis models aim for an $AUC>0.9$ to be considered useable. However, $AUC$ values like any other measurements should be interpreted within the context of the project goals. For example, for a certain medical condition, doctors might prefer a model with a high or near perfect sensitivity even if it means a lower specificity. In other words, they would much rather flag all patients having a condition along with some people who are healthy rather than miss out on patients with the condition. Keep in mind that medical diagnosis tests are just that, tests, which are meant to help doctors make a differential diagnosis taking into consideration other factors, including other test results and patient symptoms.

You May Also Enjoy

In this notebook we are going to visually explore the weather in Malta over the last 24 years, from 1997 to 2020. To achieve this we first need to download w...

The Malta–Sicily Interconnector connects Malta to the Synchronous grid of Continental Europe through the Ragusa substation in Sicily, operated by the Transmi...

This is a summary of the most useful pandas features and is based on some of the techniques discussed in Ted Petrou’s Minimally Sufficient Pandas article.

Recently I read the excellent tutorial Deep Learning and Medical Image Analysis with Keras by Dr. Adrian Rosebrock’s. Adrian’s tutorial shows how to use a pr...